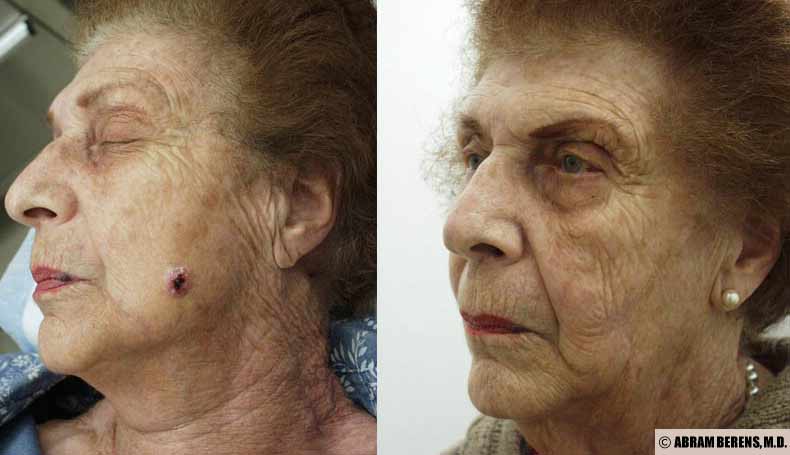 Skin cancer is a prevalent type of cancer that develops from skin cells that are growing abnormally. The majority of skin cancers form on areas of the body that are frequently exposed to the sun, as harmful South Florida UV rays cause damage to the epidermis. Fortunately the success rate for curing skin cancer is extremely high if it is detected early enough. Dr Berens can surgically remove cancerous moles and other cancerous skin growths in his Plantation office.

Basal cell carcinoma is the most common form of skin cancer we see in our Ft Lauderdale office. Basal cells reside in the deepest layer of the epidermis, along with hair follicles and sweat ducts. When a person is overexposed to UVB radiation, it damages the body’s natural repair system, which causes basal cell carcinomas to grow. These tend to be slow-growing tumors and rarely metastasize (spread). Basal cell carcinomas can present in a number of different ways.

Squamous cells are found in the upper layer (the surface) of the epidermis. They look like fish scales under a microscope and present as a crusted or scaly patch of skin with an inflamed, red base. They are often tender to the touch. It is estimated that 250,000 new cases of squamous cell carcinoma are diagnosed annually, and that 2,500 of them result in death. This is why it is very important to make an appointment for surgery in our Plantation Broward office if you have any moles that concern you.

While melanoma is the least common type of skin cancer, it is by far the most virulent. It is the most common form of cancer among young adults age 25 to 29. Melanocytes are cells found in the bottom layer of the epidermis. These cells produce melanin, the substance responsible for skin pigmentation. That’s why melanomas often present as dark brown or black spots on the skin. Melanomas spread rapidly to internal organs and the lymph system, making them quite dangerous. Early detection and removal is critical for curing this skin cancer.

Looking for the signs of skin cancer is important, but what should you be looking for? Schedule a skin cancer detection or removal appointment in Fort Lauderdale/Miami immediately if you notice: